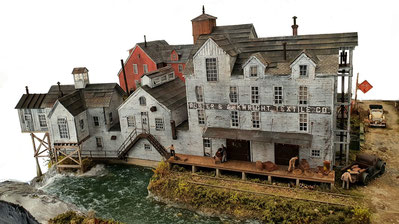 MONUMENTS OF FORGOTTEN TIMES - Buildings, properties and industrial plants as they hardly exist today, but which should be remembered here in an artistic way. Settled in the first half of the 19th century, such buildings and facilities can hardly be found today. The unique architecture and optics should be saved from being forgotten as a model. Buildings that, like their models, are made of wood, lavishly painted and realistically aged can be found in their original scenery - in lifelike dioramas, which without exception reflect the time of the last century and thus artistically memorialize the architecture and construction methods of that time.

The scale of these dioramas is primarily the railway scale hO (1:87), the larger scale o (1:48) and, in a few exceptions, the smaller scale N (1:160). As with the real buildings, the models are largely made in the same construction method and the same materials - made of wood and plaster. Resin or metal is only used in a few exceptions. These models have their origins as so-called "Craftsman kits" in America and are less known in Germany. In addition to the main components made of wood (laser cut, milling technology or individual strip wood), other parts are made of plasterm but also resin, plastic, white metal, cardboard and paper could be included. Countless decorative items complement most of these kits and bring the scenery to life. Well-known manufacturers are, for example, SierraWest Scale Models, FOS Scale Models, Bar Mills, Carolina Craftsman Kits, Banta Model Works or B.T.S. or the no more existing companies such as Master Creations, South River Model Works or Fine Scale Miniatures by the legendary George Sellios.

An amazing waterfront scene with four different structures, situated on piers over the water. A wonderful kit by Carolina Craftsman Kits (CCK), developed in cooperation with Jason Jenson.

Sawmill complex at the Pino Grande - The award winning craftsman kit from SierraWest Scale Models in ho-scale (1:87) in a realistic diorama with finest details. Made of stripwood, resin and metal!

"Antietam Millwork" - a beautiful old watermill located at a small mill canal, surrounded by rocks, valleys and forrests. A beautiful kit of Carolina Craftsman Kits (CCK) in ho-scale made.

A "Franklin and South Manchester"-Tribute Kit from Bar Mills which represents a legendary structure made by George Sellios which is located on his legendary railroad.

A dream is cominig true - My own American factory site of the early 19th century. Fully scratch built, constructed of wood, plastic, plaster, metal and more in hO-scale.

Gigantic diorama of John McCabes Lumber company in ho-scale (1:87). The huge Slatyfork Sawmill with full interior and many further buildings made of laser-cut wood by B.T.S.

The Mud Flap Cafe - a typical of truck stops in the 1940's and beyond. A typical landmark for hO truck drivers, a typical scenery on the Route 66 by FOS Scale Models.

SCENES OF A WESTERN ROAD

Several buildings from Banta Models in a diorama of a Western Road. CHILLERY'S CAFE & RUBIE'S SALOON are the first buildings. More to come soon in a diorama in hO-scale.

Bar Mills small kit of the OAKLEAF SHIPPING & STORAGE company. Trying - only trying. My first attempt building a craftsman kit. Several technics tried. Do not expect too much here.

Find out about the latest releases with the Email Newsletter